On July 27th, 1789, An Act for Establishing an Executive Department, to be Denominated The Department of Foreign Affairs was passed by the First Federal Bicameral Congress and signed into law by President George Washington. John Jay, Articles of Confederation Secretary of Foreign Affairs turned down reappointment but agreed to serve as acting Secretary until a Presidential appointment was confirmed. During the enactment of this bill a debate arose as to the power of removal of the Foreign Secretary. One side contended that the power belonged to the President, by virtue of the executive powers of the Government vested in him by the constitution. The other side maintained that the power of removal should be exercised by the President, conjointly with the Senate. The important question was decided by Congress in favor of the President's power to remove the heads of all these Departments, on the ground that they are Executive Departments. 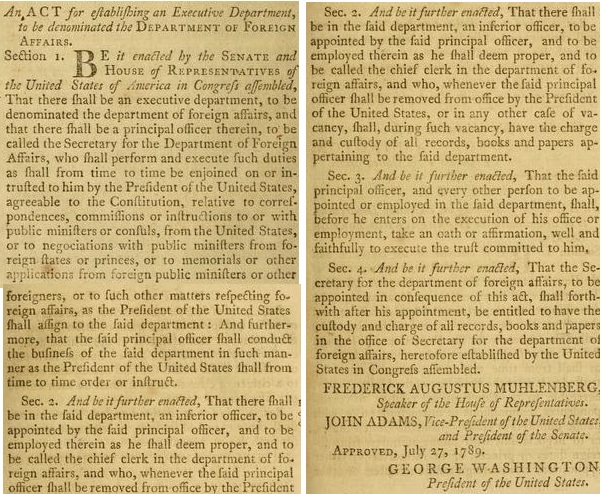 On September 15th, 1789, An Act to provide for the safe-keeping of the Acts, Records and Seal of the United States, and for other purposes was passed. This law changed the name of the Department of Foreign Affairs to the Department of State because certain domestic duties were assigned to the agency. These included: Receipt, publication, distribution, and preservation of the laws of the United States; Preparation, sealing, and recording of the commissions of Presidential appointees; Preparation and authentication of copies of records and authentication of copies under the Department's seal; Custody of the Great Seal of the United States; Custody of the records of the former Secretary of the Continental Congress, except for those of the Treasury and War Departments. 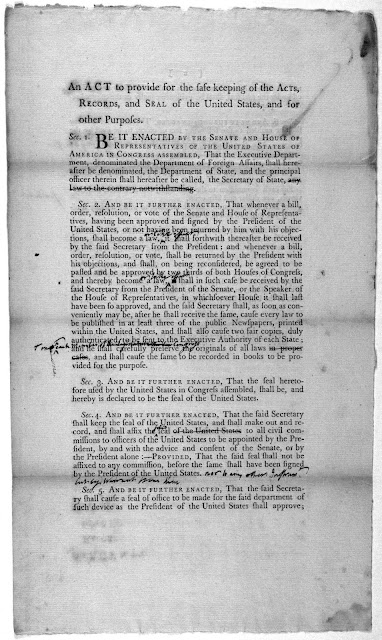 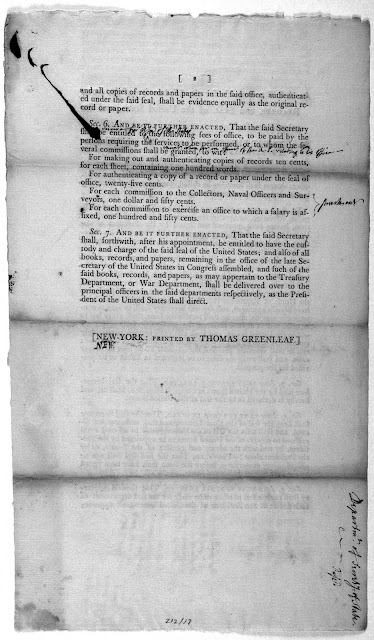 Thomas Jefferson was appointed by President Washington September 25, 1789 and confirmed by the U.S. Senate the following day. Chief Justice John Jay served as Acting Secretary of State until Secretary Jefferson returned from France. Other domestic duties for which the Department was responsible at various times included issuance of patents on inventions, publication of the census returns, management of the mint, control of copyrights, and regulation of immigration.

An Act to provide for the safe-keeping of the Acts, Records and Seal of the United States, and for other purposes.

Sec. 2. And be it further enacted, That whenever a bill, order, resolution, or vote of the Senate and House of Representatives, having been approved and signed by the President of the United States, or not having been returned by him with his objections, shall become a law, or take effect, it shall forthwith thereafter be received by the said Secretary from the President; and whenever a bill, order, resolution, or vote, shall be returned by the President with his objections, and shall, on being reconsidered, be agreed to be passed, and be approved by two-thirds of both Houses of Congress, and thereby become a law or take effect, it shall, in such case, be received by the said Secretary from the President of the Senate, or the Speaker of the House of Representatives, in whichsoever House it shall last have been so approved; and the said Secretary shall, as soon as conveniently may be, after he shall receive the same, cause every such law, order, resolution, and vote, to be published in at least three of the public newspapers printed within the United States, and shall also cause one printed copy to be delivered to each Senator and Representative of the United States, and two printed copies duly authenticated to be sent to the Executive authority of each State;Act of March 2, 1799, ch. 30, sec. 1. and he shall carefully preserve the originals, and shall cause the same to be recorded in books to be provided for the purpose.

Sec. 5. And be it further enacted, That the said Secretary shall cause a seal of office to be made for the said department of such device as the President of the United States shall approve, and all copies of records and papers in the said office, authenticated under the said seal, shall be evidence equally as the original record or paper.

Sec. 6. And be it further enacted, That there shall be paid to the Secretary, for the use of the United States, the following fees of by the persons requiring the services to be performed, except when they are performed for any officer of the United States, in a matter relating to the duties of his office, to wit: For making out and authenticating copies of records, ten cents for each sheet, containing one hundred words; for authenticating a copy of a record or paper under the seal of office, twenty-five cents.

The Congressional Evolution of the United States of America

Presidents of the United States of America

Capitals of the United Colonies and States of America

Book a primary source exhibit and a professional speaker for your next event by contacting Historic.us today. Our Clients include many Fortune 500 companies, associations, non-profits, colleges, universities, national conventions, PR and advertising agencies. As a leading national exhibitor of primary sources, many of our clients have benefited from our historic displays that are designed to entertain and educate your target audience. Contact us to learn how you can join our "roster" of satisfied clientele today!

Primary Source exhibits are available for display in your community. The costs range from $1,000 to $35,000 depending on length of time on loan and the rarity of artifacts chosen.

No Taxation Without Representation

US Bill of Rights

*Republican Party - - is a defunct political party organized by Thomas Jefferson and James Madison in 1791. The Party went out of existence over the schism between John Quincy Adams and Andrew Jackson (both Republican candidates) over the Presidential election of 1824. Today, for the sake of expediency, political scientists incorrectly refer to it as the Democratic-Republican Party. Party members throughout its existence never utilized the name “Democratic-Republican.”

*** President of the Confederate States of America